Words of Clan Mother Ahnissi to her Favored Daughter

In the beginning there were two littermates, Ahnurr and Fadomai. After many phases, Fadomai said to Ahnurr, "Let us wed and make children to share our happiness."

And they gave birth to Alkosh, the First Cat. And Ahnurr said, "Alkosh, we give you Time, for what is as fast or as slow as a cat?"

And they gave birth to Khenarthi, the Winds. "Khenarthi, to you we give the sky, for what can fly higher than the wind?"

And they gave birth to Magrus, the Cat's Eye. "Magrus, to you we give the sun, for what is brighter than the eye of a cat?"

And they gave birth to Mara, the Mother Cat. "Mara, you are love, for what is more loving than a mother?"

And they gave birth to S'rendarr, the Runt. "S'rendarr, we give you mercy, for how does a runt survive, except by mercy?"

And many phases passed and Ahnurr and Fadomai were happy.

"Hircine, you are the Hungry Cat, for what hunts better than a cat with an empty belly?"

"Merrunz, you are the Ja'Khajiit, for what is more destructive than a kitten?"

"Sangiin, you are the Blood Cat, for who can control the urges of blood?"

"Sheggorath, you are the Skooma Cat, for what is crazier than a cat on skooma?"

And Ahnurr said, "Two litters is enough, for too many children will steal our happiness."

But Khenarthi went to Fadomai and said, "Fadomai-mother, Khenarthi grows lonely so high above the world where not even my brother Alkosh can fly." Fadomai took pity on her and tricked Ahnurr to make her pregnant again.

And from the beginning, Nirni and Azurah fought for their mother's favor.

Ahnurr caught Fadomai while she was still birthing, and he was angry. Ahnurr struck Fadomai and she fled to birth the last of her litter far away in the Great Darkness. Fadomai's children heard what had happened, and they all came to be with her and protect her from Ahnurr's anger. 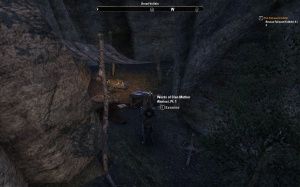