Words of Clan Mother Ahnissi to her Favored Daughter

"Ja-Kha'jay, to you Fadomai gives the Lattice, for what is steadier than the phases of the moons? Your eternal motions will protect us from Ahnurr's anger." And the moons left to take their place in the heavens. And Ahnurr growled and shook the Great Darkness, but he could not cross the Lattice.

"Nirni, to you Fadomai leaves her greatest gift. You will give birth to many people as Fadomai gave birth today." When Nirni saw that Azurah had nothing, Nirni left smiling.

And Fadomai said, "When Nirni is filled with her children, take one of them and change them. Make the fastest, cleverest, most beautiful people, and call them Khajiit."

And Fadomai said, "The Khajiit must be the best climbers, for if Masser and Secunda fail, they must climb Khenarthi's breath to set the moons back in their courses."

And Fadomai said, "The Khajiit must be the best deceivers, for they must always hide their nature from the children of Ahnurr."

And Fadomai said, "The Khajiit must be the best survivors, for Nirni will be jealous, and she will make the sands harsh and the forests unforgiving, and the Khajiit will always be hungry and at war with Nirni."

And with these words, Fadomai died.

After many phases, Nirni came to Lorkhaj and said, "Lorkhaj, Fadomai told me to give birth to many children, but there is no place for them."

And Lorkhaj said, "Lorkhaj makes a place for children and Lorkhaj puts you there so you can give birth." But the Heart of Lorkhaj was filled with the Great Darkness, and Lorkhaj tricked his siblings so that they were forced into this new place with Nirni. And many of Fadomai's children escaped and became the stars. And many of Fadomai's children died to make Nirni's path stable. And the survivors stayed and punished Lorkhaj.

The children of Fadomai tore out the Heart of Lorkhaj and hid it deep within Nirni. And they said, "We curse you, noisy Lorkhaj, to walk Nirni for many phases."

But Nirni soon forgave Lorkhaj for Nirni could make children. And she filled herself with children, but cried because her favorite children, the forest people, did not know their shape.

And Azurah came to her and said, "Poor Nirni, stop your tears. Azurah makes for you a gift of a new people." Nirni stopped weeping, and Azurah spoke the First Secret to the Moons and they parted and let Azurah pass. And Azurah took some forest people who were torn between man and beast, and she placed them in the best deserts and forests on Nirni. And Azurah in her wisdom made them of many shapes, one for every purpose. And Azurah named them Khajiit and told them her Second Secret and taught them the value of secrets. And Azurah bound the new Khajiit to the Lunar Lattice, as is proper for Nirni's secret defenders. Then Azurah spoke the Third Secret, and the Moons shone down on the marshes and their light became sugar.

But Y'ffer heard the First Secret and snuck in behind Azurah. And Y'ffer could not appreciate secrets, and he told Nirni of Azurah's trick. So Nirni made the deserts hot and the sands biting. And Nirni made the forests wet and filled with poisons. And Nirni thanked Y'ffer and let him change the forest people also. And Y'ffer did not have Azurah's subtle wisdom, so Y'ffer made the forest people Elves always and never beasts. And Y'ffer named them Bosmer. And from that moment they were no longer in the same litter as the Khajiit.

And because Y'ffer had no appreciation for secrets, he shouted the First Secret across all the heavens with his last breath so that all of Fadomai's children could cross the Lattice. But Azurah, in her wisdom, closed the ears of angry Ahnurr and noisy Lorkhaj so they alone did not hear the word. 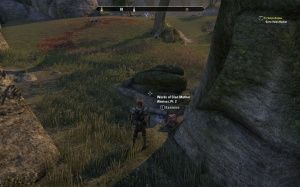