In bright springtime, when the ground is drunk with rainwater and the sun smiles on Valenwood, the Wood Elves travel to the Den of the Eldest, an ancient strangler. There, they offer thanks to Y'ffre for the blooming of yet another spring, and they read the history of their home in the branches of the Eldest.

Then, a great festival is thrown by the Green Pact Bosmer, in celebration of the Springtime and the Eldest. Then Elves celebrate long into the night, drinking and regaling each other with stories of past festivals and pilgrims.

The tales run both sacred and profane.

There's the tale of the notorious warlord whose entire army stopped at the Den of the Eldest and went in to pay their respects. When they emerged, they dropped their weapons to the ground and left them where they lay. They never made war again.

But there is also the tale of the impish Wood Elf who spiked the pilgrims' punch with a powder ground from the dung of timber mammoths, that caused the entire gathering to be troubled by the most foul odors from their backsides. Long into the night they groaned as the stink grew unbearable, until they were all so inured to the smell that their groans turned to bursts of laughter that filled the wood.

They also tell of the first pilgrims, an old, childless couple who tended the Eldest as their own offspring. They became the first Silvenar and the first Green Lady.

There are many more tales the pilgrims tell, but few have been written down. The curious would do best to travel to the Eldest in the Springtime and hear the stories and behold the ancient strangler for themselves. 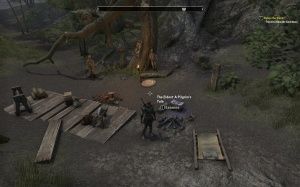