Azura and the Box

Nchylbar had enjoyed an adventurous youth, but he had grown to be a very wise, very old Dwemer who spent his life searching for truth and dispelling superstitions. He invented much and created many theorems and logic structures that bore his name, but much of the world still puzzled him. Nothing was a greater enigma to him that the nature of the Aedra and Daedra. Over the course of his research, he came to the conclusion that many of the gods were entirely fabricated by man and mer.

Nothing, however, was a greater question to Nchylbar than the limits of divine power. Were the Greater Beings the masters of the entire world, or did the humbler creatures have the strength to forge their own destinies? As Nchylbar found himself nearing the end of his life, he felt he must understand this last basic truth.

Among the sage's acquaintances was a holy Chimer priest named Athynic. When the priest was visiting Bthalag-Zturamz, Nchylbar told him what he intended to do to find the nature of divine power. Athynic was terrified. He pleaded with his friend not to break this great mystery, but Nchylbar was resolute. Finally, the priest agreed to assist out of love for his friend, though he feared the results of this blasphemy.

Athynic summoned Azura. After the usual rituals by which the priest declared his faith in her powers and Azura agreed to do no harm to him, Nchylbar and a dozen of his students entered the summoning chamber, carrying with them a large box.

"As we see you in our land, Azura, you are the Goddess of the Dusk and Dawn and all the mysteries therein," said Nchylbar, trying to appear as kindly and obsequious as he could be. "It is said that your knowledge is absolute."

"So it is," smiled the Daedra.

"You would know, for example, what is in this wooden box," said Nchylbar.

Azura turned to Athynic, her brow furrowed. The priest was quick to explain, "Goddess, this Dwemer is a very wise and respected man. Please believe me: his intention is not to mock your greatness, but to demonstrate it to this scientist and to the rest of his skeptical race. I tried to explain your power to him, but his philosophy is such that he must see it demonstrated."

"If I am to demonstrate my might in a way to bring the Dwemer race to understanding, it might have been a more impressive feat you would have me do," growled Azura, who turned to look Nchylbar in the eyes. "There is a red-petaled flower in the box."

Nchylbar did not smile or frown. He simply opened the box and revealed to all that it was empty.

When the students turned to look to Azura, she was gone. Only Athynic had seen the Goddess' expression before she vanished, and he could not speak, for he was trembling so. He knew a curse had fallen on him, but even crueler was the knowledge of divine power that had been demonstrated. Nchylbar also looked pale, uncertain on his feet, but his face shone with bliss instead of fear: the smile of a Dwemer finding evidence for a truth only suspected.

Two of his students supported him, and two more supported the priest as they left the chamber.

"I have studied much over the years, performed countless experiments, taught myself a thousand languages, and yet the skill that has taught me the final truth is one I learned when I was but a poor, young man, struggling to earn enough gold so I could eat," whispered the sage.

As he was escorted up the stairs to his bed, a red flower petal fell from the sleeve of his voluminous robe. Nchylbar died that night, a portrait of peace that could only have come from contented knowledge. 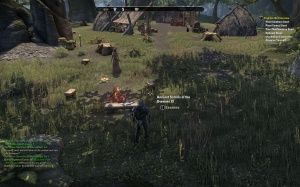