The Importance of Where

The chieftain of Othrobar gathered his wise men together and said, "Every morning a tenfold of my flock are found butchered. What is the cause?"

Fangbith the Warleader said, "A monster may be coming down from the Mountain and devouring your flock."

Ghorick the Healer said, "A strange new disease perhaps is to blame."

Beran the Priest said, "We must sacrifice to the Goddess for her to save us."

The wise men made sacrifices, and while they waited for their answers from the Goddess, Fangbith went to Mentor Joltereg and said, "You taught me well how to forge the Cudgel of Zolia, and how to wield it in combat, but I must know now when it is wise to use my skill. Do I wait for the Goddess to reply or the medicine to work, or do I hunt the monster that I know is in the mountain?"

"When is not important," said Joltereg. "Where is all that is important."

So Fangbith took his Zolic cudgel in hand and walked far through the dark forest until he came to the base of the Great Mountain. There he met two monsters. One, bloodied with the flesh of the chieftain of Othrobar's flock, fought him while its mate fled. Fangbith remembered what his master had taught him, that "where" was all that was important.

He struck the monster on each of its five vital points: head, groin, throat, back, and chest. With five blows to the five points, the monster was slain. It was too heavy to carry with him, but still triumphant, Fangbith returned to Othrobar.

"I say I have slain the monster that ate your flock," he cried.

"What proof have you that you have slain a monster?" asked the chieftain.

"I say I have saved the flock with my medicine," said Ghorick the Healer.

"I say the Goddess has saved the flock by my sacrifices," said Beran the Priest.

Two mornings went by and the flocks were safe, but on the morning of the third day, another tenfold of the chieftain's flock was found butchered. Ghorick the Healer went to his study to find a new medicine. Beran the Priest prepared more sacrifices. Fangbith took his Zolic cudgel in hand again, and he walked far through the dark forest until he came to the base of the Great Mountain. There he met the other monster, bloodied with the flesh of the chieftain of Othrobar's flock. They did battle, and again Fangbith remembered what his master had taught him, that "where" was all that was important.

A great feast was held in Fangbith's honor, and the flock of Othrobar was never again slain. Joltereg embraced his student and said, "You have at last learned the importance of where you strike your blows." 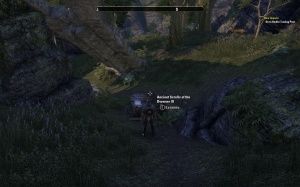