In the 283rd year of the Second Era, Potentate Versidue-Shaie was faced with a disintegrating empire. The vassal kingdoms throughout Tamriel had reached a new height of rebellion, openly challenging his rule. They refused his taxes and led sorties against the Imperial garrisons throughout the land. At the destruction of his fortress in Dawnstar, he gathered the Imperial Council in what would be called the Council of Bardmont, after the town south of Dawnstar where they met. There the Potentate declared catholic and universal martial law. The princes of Tamriel would dissolve their armies or face his wrath.

The next thirty-seven years were perhaps the bloodiest in the violent history of Tamriel.

In order to crush the last of the royal armies, Versidue-Shaie had to sacrifice many of his best legions, as well as spend nearly every last piece of gold in the Imperial treasury. But he accomplished the unthinkable. For the first time in history, there was but one army in the land, and it was his own.

The problems that immediately surfaced were almost as staggering as the triumph itself. The Potentate had impoverished the land by his war, for the vanquished kingdoms had also spent the last of their gold in defense. Farmers and merchants alike had their livelihood ruined. Before the princes of Tamriel would not pay his taxes—now, they could not.

The only persons who benefited from the war were criminals, who preyed upon the ruins of the lawless land, without fear of arrest now that all the local guards and militia were gone. It was a crisis the Akaviri had seen coming long before he destroyed the last of his subjects' armies, but for which he had no solution. He could not allow his vassals their own armies again, but the land was deeper into the stew of anarchy than it had ever been before. His army sought to fight the rise of crime, but a central authority was no threat against the local underworld.

In the dawn of the year 320, a kinsman of Versidue-Shaie, Dinieras-Ves, "The Iron," presented himself with a host of companions before the Potentate. It was he who suggested an order of mercantile warriors-for-hire, who could be hired by nobility in lieu of a standing army. The employment would be temporary, and a percentage of their fees would go to the Potentate's government, thus putting salve on two of Versidue-Shaie's greatest pains.

Though it was then called the Syffim, after the Tsaesci word for "soldiers," the organization that was to be known as the Fighters Guild had been born. 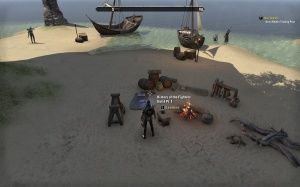