Morrowind is holy country, and its gods are flesh and blood. Collectively, these gods are called the Tribunal, the triune ALMSIVI, three deities exemplifying Dunmeri virtues. Almalexia is Mercy, Vivec is Mastery, and Sotha Sil is Mystery. Vivec is easily the most popular of them all. Vivec is also the most public, for he is the beloved Warrior-Poet of the True People, paradoxically beautiful and bloody. Vivec is an artistic violence. Vivec is represented in Temple literature and liturgy as one of the divine kings of Morrowind. He guards the sacred Velothi subcontinent of Vvardenfell, and stands guard over Red Mountain. He is part of the holy Tribunal, a god of the New Temple, and an aspect of the blessed and righteous ALMSIVI.

This explicit presentation of Vivec the Guardian God-King and Warrior-Poet is the one most accessible and familiar to Westerners. However, it is important to remember that Vivec is also known to the Dunmer as the transcendent evolution of the Daedra that anticipated him, Black Hands Mephala, a foundation figure of the earliest Chimer. This darker side of Vivec does not appear in the popular literature and liturgy, but is instinctively understood and accepted by the Dunmer as an integral part of Vivec's divine aspect. A more complete appreciation of the complex nature of Vivec requires an understanding of the nature of Vivec's Anticipation, Mephala, and the darker themes represented by this Daedra Lord's modes and motivations.

Each of the three Tribunes of the Temple were represented in the dawn of Chimeri culture by their Anticipations. These Anticipations are known to the West as the sinister Daedra Lords Azura, Boethiah, and Mephala. In Temple theology, however, Azura is the Anticipation of Sotha Sil, the Mage-Lord of Almsivi. Boethiah is the Anticipation of Almalexia, Almsivi's Mother and Lady. Mephala is the Anticipation of Vivec. According to legend, under the guidance of these three Daedra Lords, a discontented throng of Altmer transformed themselves into a new people and founded a new land. And while Boethiah, the so-called Prince of Plots, provided the revolutionary methods needed to bring about this transformation, Mephala was the shadowy implementer of those methods.

As known in the West, Mephala is the demon of murder, sex, and secrets. All of these themes contain subtle aspects and violent ones (assassination/genocide, courtship/orgy, tact/poetic truths); Mephala is understood paradoxically to contain and integrate these contradictory themes. And all these subtle undercurrents and contradictions are present in the Dunmer concepts of Vivec, even if they are not explicitly described and explained in Temple doctrine.

The Dunmer do not envision Lord Vivec as a creature of murder, sex, and secrets. Rather, they conceive of Lord Vivec as benevolent king, guardian warrior, poet-artist. But, at the same time, unconsciously, they accept the notion of darker, hidden currents beneath Vivec's benevolent aspects.

For example, one of the most striking persistent myths associated with Vivec is the story that Vivec conspired with his co-rulers Almalexia and Sotha Sil in the murder of Lord Nerevar, the greatest of Dunmer heroes and generals. The story is derived from Ashlander oral tradition, and is flatly contradicted by all Temple traditions. Nonetheless, the tale is firmly established in the Dunmer imagination, as if to say, "Of course Vivec would never have conspired to murder Lord Nerevar, but it happened so long ago … who can know the truth?"

The public face of Vivec is benign, sensitive, compassionate, and protective of his followers. At the same time, the Dunmer seem irrationally comfortable with the hidden aspects of Vivec, the darker components of violence, lust, and conspiracy associated with the more primitive and ruthless impulses of the Anticipations. 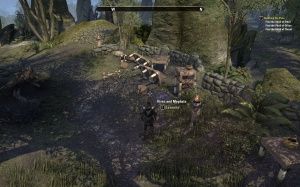