A Study of Daedra Worship

Daedra worship is not prohibited by law in Cyrodiil. Primarily, this is a result of the Imperial Charter granted the Mages Guild permitting the summoning of Daedra. Nonetheless, chapel and public opinion is so strongly against Daedra worship that those who practice Daedric rituals do so in secret.

However, opinions about Daedra worship differ widely in other provinces. Even in Cyrodiil, traditional opinions have changed greatly over the years, and some communities that worship Daedra survive. Some more traditional Daedra worshipers are motivated by piety and personal conviction; while many modern Daedra worshipers are motivated by a lust for arcane power. In particular, questing heroes of all stripes seek after fabled Daedric artifacts for their potent combat and magical benefits.

I personally discovered one community worshiping the Daedra Lord Azura, Queen of Dawn and Dusk. A researcher curious about Daedra worship might investigate in several ways: through a study of the literature, through exploration and discovery of ancient Daedric shrines, through questioning local informants, or through questioning worshipers themselves. I used all these means to discover the shrine of Azura.

First, I read books. References like this one may provide a helpful general background concerning Daedric shrines. For example, my researches led me to understand that in Cyrodiil, Daedric shrines are generally represented by statues of Daedra Lords. They are generally situated in wilderness locations far from settlements. Each shrine generally has associated with it a community of worshipers, often referred to as a "coven." Shrines have associated with them a particular time, often a day of the week, when a Daedra Lord might be solicited. A Daedra Lord will usually not deign to respond unless they regard a petitioner of sufficient prowess or strength of character. They will only respond if given the proper offering, the secret of which offering is often known only to the community of worshipers. In return for the completion of some task or service, the Daedra Lord will often undertake to offer an artifact of power to a successful quester.

Then I questioned locals with an intimate knowledge of the wilderness. Two classes of informants I found especially useful: well-traveled adventurers (who might come across shrines in their travels), and scholars of the Mages Guild. In the case of the Shrine of Azura, both sources were profitable. I discovered a Cheydinhal hunter who had chanced across a strange epic statue in his travels. It depicted a woman with outstretched arms. In one hand, she held a star; in the other hand, she held a crescent moon. He had shunned the statue out of superstitious fear, but had marked the location in memory: far north of Cheydinhal, northwest of Lake Arrius, high in the Jerall Mountains. After proceeding to the local Mages Guild with a description of the statue, I was able to confirm from its description the identity of the Daedra Lord worshiped.

Having discovered the location of the shrine, I visited it and discovered there the community of worshipers. Because of the strength of opinion against Daedra worship, the worshipers were at first reluctant to admit their identity. After I had won their trust, they were willing to divulge to me the secrets of the times when Azura would hear petitions (from dusk to dawn), and that the offering required by Azura was glow dust, a substance obtained from the will-o-the-wisp.

I am, of course, nothing more than a scholar, so it did not lie within my power to find a will-o-the-wisp to obtain glow dust. Nor am I certain that Azura would have found me worthy to make such an offering, even had I proffered it. Despite this, I was assured that if I had been able to make such an offering, and if it had been accepted, Azura would have given me some sort of quest. Upon its completion, I might have earned the reward of Azura's Star, a Daedric artifact of legendary magical powers.

I have since heard rumors of the existence in Cyrodiil of several other Daedric shrines, the Daedric Lords to which they are dedicated, and the Daedric artifacts that might be won by questing heroes. Hircine the Huntsman, for example, is linked in legend to the Savior's Hide, a powerful enchanted armor. The hammer Volendrung is associated with Malacath, Lord of Monsters, and the eponymously named Mace of Molag Bal is also thought to be the object of Daedra worship. Other Daedra Lords, their shrines, and their worshipers remain to be discovered by earnest and persistent researchers. 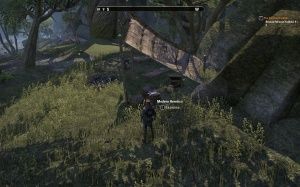