"When thou enterest into Oblivion, Oblivion entereth into thee."

The greatest mage who ever lived was my master Morian Zenas.You have heard of him as the author of the book "On Oblivion," the standard text for all on matters Daedric. Despite many entreaties over the years, he refused to update his classic book with his new discoveries and theories because he found that the more one delves into these realms, the less certain one is. He did not want conjecture. He wanted facts.

For decades before and after the publication of "On Oblivion," Zenas compiled a vast personal library on the subject of Oblivion, the home of the Daedra. He divided his time between this research and personal magical growth, acting on the assumption that should he succeed in finding a way into the dangerous world beyond and behind our own, he would need much power to wander its dark paths.

Twelve years before Zenas began the journey he had prepared his life to make, he hired me as his assistant. I possessed the three attributes he required for the position: I was young and eager to help without question. I could read any book once and memorize its contents, and despite my youth, I was already a Master of Conjuration.

Zenas too was a Master of Conjuration—indeed, a master at all the known and unknown schools of magic—but he did not want to rely on his ability alone in the most perilous of his research. In an underground vault, he summoned Daedra to interview them on their native land. For that, he needed another conjurer to make certain they came, were bound, and were sent away again without incident.

I will never forget that vault, not for its look which was plain and unadorned, but for what you couldn't see. There were scents that lingered long after the summoned creatures had left, flowers and sulfur, sex and decay, power and madness. They haunt me still to this very day.

Conjuration, for the layman unacquainted with its workings, connects the caster's mind with that of the summoned. It is a tenuous link, meant only to lure, hold, and dismiss, but in the hands of a master, it can be much stronger. The Psijics and Dwemer can (in the Dwemer's case, perhaps I should say "could") connect with the minds of others and converse miles apart: a skill that is sometimes called telepathy.

Over the course of my employment, Zenas and I developed such a link between one another. It was accidental, a result of two powerful conjurers working closely together, but we decided that it would be invaluable should he succeed in traveling to Oblivion. Since the denizens of that land could be touched even by the skills of an amateur conjurer, it was possible we could continue to communicate while he was there, so I could record his discoveries.

The "Doors to Oblivion," as Morian Zenas would say, are not easily found. We exhausted many possibilities before we found one where we held the key.

The Psijics of Artaeum have a place they call The Dreaming Cave, where it is said one can enter into the Daedric realms and return. Iachesis, Sotha Sil, Nematigh, and many others have been recorded as using this means, but despite many entreaties to the order, we were denied its use. Celarus, the leader of the order, told us it had been sealed off for the safety of all.

The reader may have heard of other doors, and he may be assured we attempted to find them all.

Some are pure legend, or at any rate, not traceable based on the information left behind. There are references in lore to Maruhk's Abyss, the Corryngton Mirror, the Mantellan Crux, the Crossroads, the Mouth, a riddle of an alchemical formula called Jacinth and Rising Sun, and many other places and objects that are said to be doors, but we could not find these.

Some exist, but cannot be entered safely. The whirlpool in the Abecean called the Maelstrom of Bal can make ships disappear, and it may be a portal into Oblivion, but the trauma of riding its waters would surely slay any who tried. Likewise, we did not consider it worth the risk to leap from the Pillar of Thras, a thousand-foot-tall spiral of coral, though we witnessed the sacrifices the Sload made there. Some victims were killed by the fall, but some indeed seemed to vanish before being dashed on the rocks. Since the Sload did not seem certain why some were taken and some died, we did not favor the odds of the plunge.

The simplest and most maddeningly complex way to go to Oblivion was simply to cease to be here and begin to be there. Throughout history, there are examples of mages who seemed to travel to the realms beyond ours seemingly at will. Many of these voyagers are long dead, if they ever existed, but we were able to find one still living. In a tower off Zafirbel Bay on the island of Vvardenfell in the province of Morrowind, there exists a very old, very reclusive wizard named Divayth Fyr. 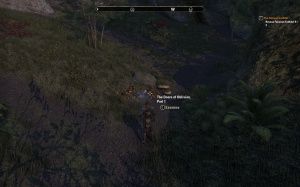